In accordance with the provisions of article 9.4.b) of Royal Decree 521/2020, May 19th, which establishes the basic organisation of the Armed Forces, the national military bodies related to international or multinational organizations are:

The national support elements are the offices responsable for providing administrative and general support to the staff assigned to the international organizations attached to them.

The national contingents integrated into international and multinational organizations are made up of Spanish personnel dependent on the CHOD, whether they are assigned to or on secondment to the units, centres or bodies of the aforementioned organisations, occupying international or multinational non-specific positions within the military representations, the national elements or national support elements. 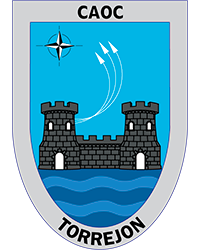 Combined Air Operations Centre Torrejón evolved from the former structure’s Combined Air Operations Centre 8 in early 2013 has been fulfilling its mission since the beginning of, when it, gradually assuming the air defense of the different countries that are in its area of responsibility. For this reason, all control and command equipment and systems have been modernized. It has been the 1st unit of the current NATO Structure to achieve full operational capacity in July 2014. 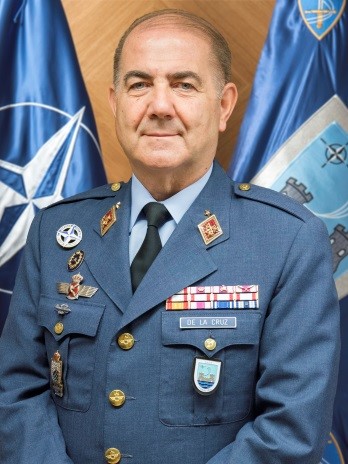 With the reduction of NATO's air control centres, CAOC-TJ had to integrate the capabilities of the former five control centres that the Alliance had in the South, prior to the Lisbon summit in 2010, thus expanding the airspace of its responsibility to cover from the Azores Islands to Romania, and from the Canary Islands to Turkey.

This implies that Portugal, Italy, Greece, Turkey, Bulgaria, Romania, Hungary, Slovenia, Croatia, Albania, Montenegro, the southern half of France and Spain are the CAOC TJ’s area of ​​responsibility, covering around 6,500 kilometres from East to West, the entire Mediterranean Sea, the Black Sea and part of the Atlantic Ocean.

There are friendly and allied countries bordering South and East of CAOC TJ’s area of responsibility but also certain areas of increasing instability.

The geographical breadth is reflected in the emblem of the CAOC TJ, representing the Columns of Hercules and the Bosphorus as towers with gates, both joined by the wall of air defence against the Mediterranean for which the CAOC TJ is responsible.

Combined Air Operations Centre Torrejón evolved from the former structure of the Combined Air Operations Centre in early 2013 and it has been fulfilling its mission since then, gradually assuming the air defence of the different countries that are in its area of responsibility. For this reason, all control and command equipment and systems have been modernized. It has been the 1st unit of the current NATO structure to achieve full operational capacity in July 2014.

Combined Air Operations Centre Torrejón is manned with staff from 17 NATO nations, currently filling 185 peacetime positions, which will increase to 190 to support an adapted structure. The post of the Commander is filled by a Lieutenant-General of the Spanish Air Force. For exercises and crisis response the unit maintains the ability to deploy its staff to contribute to NATO’s Joint Force Air Component 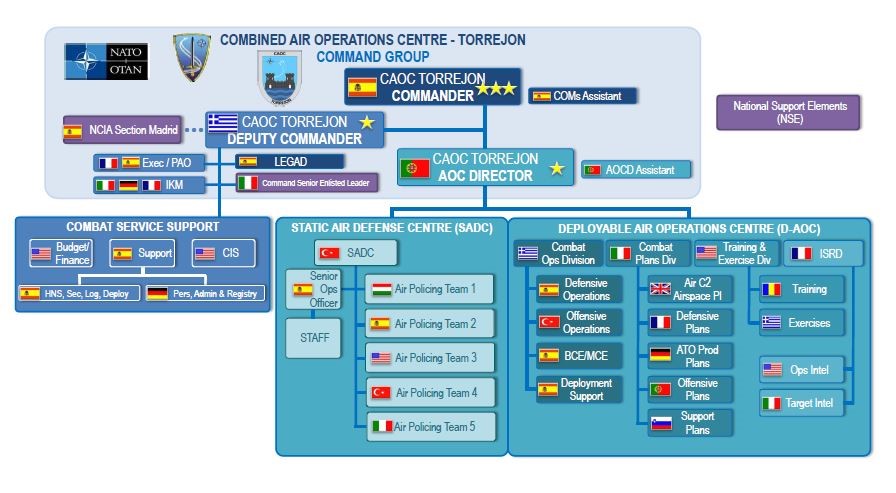 CAOC-TJ's dual mission implies that the centre is structured in two main areas: one of them can be activated or deployed during a crisis and the other is static and focused on the air defence of NATO territory.

The first one includes Training, Intelligence, Plans and Operations Divisions, and its size is flexibly adapted to the nature and entity of the operation. The static part is responsible for achieving the main objective, which is the air defence of the Alliance countries, according to the NATO Integrated Air and Missile Defence System (NATINAMDS). 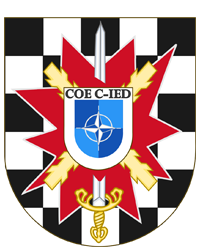 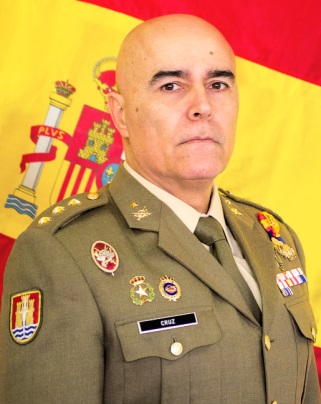