·       The lecture is part of the tribute to the Armed Forces due to their involvement throughout the pandemic.

Two lectures were told during the meeting: “Rocesvalles in the History, the literature, the myth. Carolingian Renaissance and the Jacobean hospitality” by Juan Ramón Corpas Mauleón; and the one told by CMOPS, “Armed Forces’ commitment during the health crisis due to COVID19”.

Lieutenant General Fernando López del Pozo explained that “the operation ‘Balmis’ was based in three main concepts. Its organisation, based in a component commands’ framework, efficiently activated; also, its execution, including 20,002 tasks in 98 days, focused on carrying out disinfection activities as well as logistical and health support and the assistance to the State Security Forces and Corps. Last but not least, everybody’s effort as a proof of servicemen’s commitment to their society”, explained Lieutenant General Fernando López del Pozo during his speech.

Within the period of 24 hours after the proclamation of the state of alarm, dated on March the 14th, Operation ‘Balmis’ started to deploy its units on the streets and the Military Unit for Emergencies (UME) spearheaded achieving the initial critical infrastructures’ disinfections.

"But we cannot forget the great work of each of the component commands," recalled the CMOPS. Thus, the Land Component Command put in place a large sample of its human and material resources, able to adapt and evolve to each situation. Likewise, the Maritime Component Command of which it is worth highlighting its great flexibility of use. Also, the Air Component Command provided all air transportation and health and logistics capabilities.

“As for the health contribution, we have to highlight the great work of our personnel from the Health Common Corps. During ‘Balmis’ it has been verified how the Defence Health Directorate has the capacity to organise within the military health network at the service of society”, stated the CMOPS.

Finally, the CMOPS was named Honorary Member of the Association, representing the Army, while several servicemen of the garrison of Navarra and the Army’s Infantry Regiment "América" 66 attended the meeting.

It should be noted that the members of this Regiment actively participated in the development of Operation ‘Balmis’, carrying out disinfection tasks, informative patrols to the population, as well as support to the State Security Forces and Corps with regard to security and control of borders. Lieutenant General wanted to thank all of them for their great dedication to these difficult times. 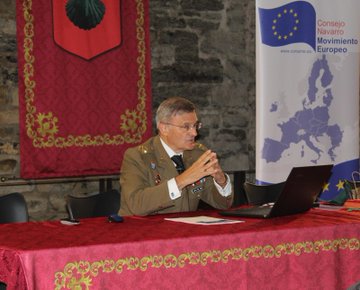 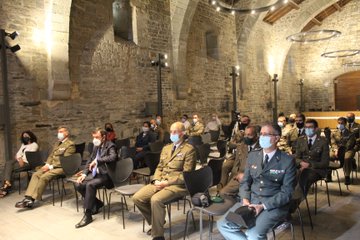