STATEMENT FROM THE CHIEF OF DEFENCE: "SERVING ALL SPANIARDS AND THE CONSTITUTION"

The Armed Forces on the anniversary of the Constitution

The Spanish Armed Forces (FAS in Spanish), composed of the Army, the Navy, the Air Force and also the Common Corps, exquisitely fulfil the mission that the Constitution assign them in Article 8 and the Organic Laws that derived from it. Its outstanding performance, backed by a strong spirit of service and by countless military operations in national territory and around the world, has led them being consistently one of the institutions best valued by our society. This service and these operations have unfortunately caused many sacrifices while guaranteeing the safety and freedom of all Spaniards. Sacrifices that, like many other limitations, we voluntarily accept with a vocation to serve the society to which we belong and which has stated that Armed Forces are needed, supporting our Constitution in a referendum with an overwhelming majority.

The Constitution is the regulation that the military have sworn or promised to defend and the one that inspires all our actions. One of the consequences of this commitment is the political neutrality of our FAS. Military status entails the limitation of certain fundamental rights such as participation in demonstrations or activities of political, union or protest nature, affiliation or collaboration in political or union organizations or the public expression of opinions on them (Articles 7 and 12.2 of Organic Law 9/2011, of July 27, on the rights and duties of members of the Armed Forces). This is so, precisely, because the Armed Forces are at the service of all Spaniards, no matter where they were born or what they think. Our commitment to Spain and to the Constitution does not offer any doubt and we have been demonstrating this in our daily actions.

In the last few days we have witnessed some statements from retired personnel who, having lost their military status, no longer have those rights limited. The opinions of these people cannot be considered representative of the group of which they were previously part but must be seen as opinions of private citizens with all right to express what they consider, but not claiming a right of representation that they do not have, damaging the image of the Armed Forces and which only confuses the public.

Today's Armed Forces do not look to the past, we are in a constant process of adapting structures and capabilities to the ongoing change in which risks and threats develop globally. Our task is to protect the Spanish so that they can carry out their aspirations in peace and safety. Always looking to the future. Always at the service of all Spaniards and of the Constitution. 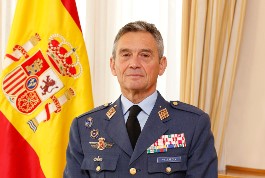