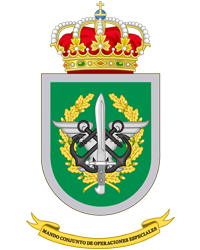 In January 2013, the Spanish Chief of the Defence Staff (JEMAD in Spanish), approved, by Ministerial Order, the establishment of the Special Joint Operations Command (MCOE in Spanish), directly dependent on the Commander of the Operations Command (CMOPS in Spanish). From its creation on October 2014, it is established at Retamares Military Base in Pozuelo de Alarcón (Madrid). MCOE has assumed all the tasks included in the Joint Special Operations.