The Replenishment Ship (BAC in Spanish) "Patiño" joined the Standing NATO Maritime Group 2 (SNMG2) today. The command of the group is held by Rear Admiral Manuel Aguirre from the frigate "Álvaro de Bazán", the commanding ship of the Group, since last June 30th.

The BAC "Patiño" joined the Naval Group yesterday, during the transit to the French port of Toulon. Starting today, September the 25th, the SNMG2 will participate, along with ships of up to nine allies and including Spanish minehunters “Duero” and “Segura”, in the Dynamic Mariner 2020 exercise, the main NATO naval exercise this year.

As soon as the encounter at sea took place, the “Patiño” began to perform its replenishment duties, proceeding to refuel the group's command ship, the frigate “Álvaro de Bazán”.

The group arrives in Toulon after stopping at the port of Algiers, from 12 to 14 September, which ended with an exercise with the Algerian navy, and after a maritime surveillance and security patrol in the central Mediterranean, in support of Allied Operation Sea Guardian.

The outstanding involvement of the Spanish Navy in the SNMG2 Group during current year and the considerable contribution to the Dynamic Mariner exercise, just behind France in terms of the number of ships, show the commitment of Spain to the Alliance and to maritime safety in the Mediterranean Sea. 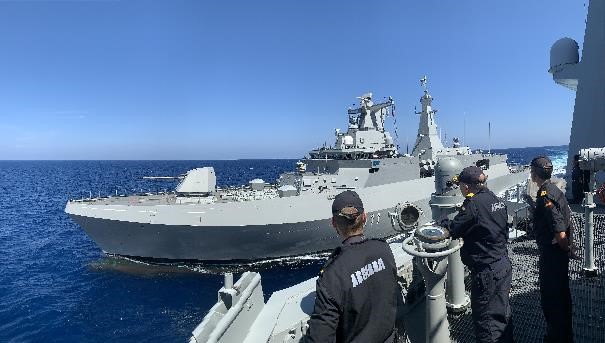