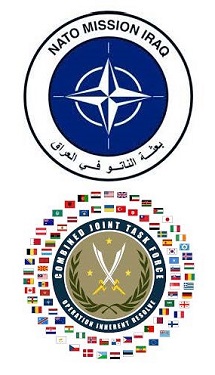 Spain, along with other countries' Armed Forces, has been involved in Iraq since 2015 in order to contribute to strengthening the Iraqi armed forces with the aim of defeating ISIS and achieving the national objectives set. All this effort, within a joint multinational force, as part of Operation Inherent Resolve

Similarly, since October 2018, it has also been advising the Iraqi government on the national security structure and developing its professional military education system, all as part of the mission known as NATO Mission-Iraq. 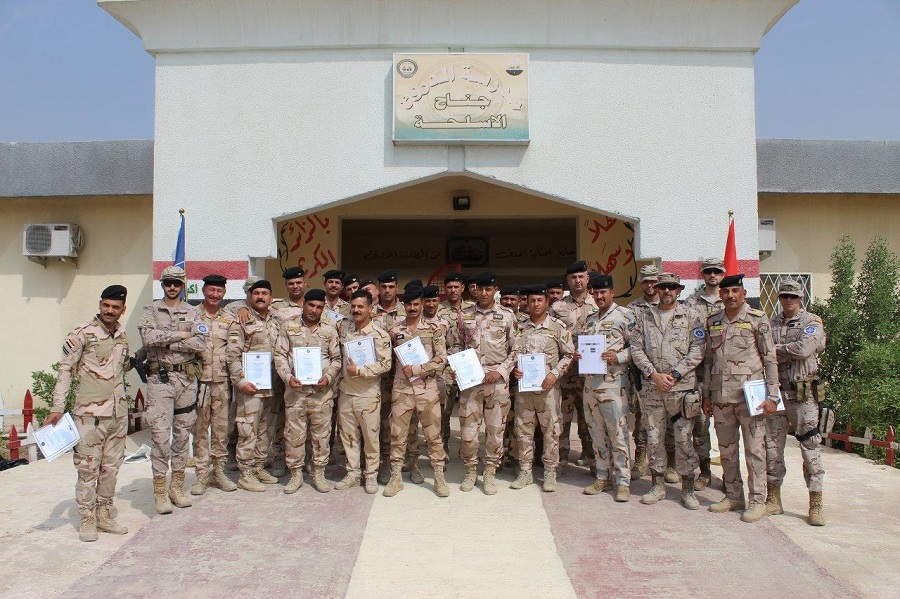 The mission builds on work previously conducted through other NATO training and capacity-building activities in Iraq. NMI is a new iteration of a long-standing relationship between the Alliance and Iraq, providing expertise and best practice in the reform of security structures, defence institution building, and training and education from the entire Alliance and its partners from all over the world.

From 2004 to 2011, NATO conducted a relatively small but important support operation in Iraq that consisted of training, mentoring and assisting the Iraqi security forces. It was known as the NATO Training Mission in Iraq (NTM-I) and became part of the international effort to help Iraq establish effective and accountable security forces. NTM-I delivered training, advice and mentoring support in a number of different settings. All NATO member countries contributed to the training effort either in or outside of Iraq, through financial contributions or donations of equipment. In parallel and reinforcing this initiative, NATO also worked with the Iraqi government on a structured cooperation framework to develop the Alliance’s long-term relationship with Iraq.

In July 2015, in response to a request by the Iraqi government, NATO agreed to provide defence and related security capacity building support. In April 2016, it began conducting a number of “train-the-trainer’’ courses in Jordan (more than 350 Iraqi security and military personnel were trained). Then, following a request from the Iraqi Prime Minister, at the Warsaw Summit in July 2016, NATO leaders agreed to provide NATO training and capacity-building activities to Iraqi security and military forces in Iraq. In January 2017, NATO deployed a modest but scalable Core Team to Baghdad of eight civilian and military personnel, setting up NATO’s permanent presence in Iraq. Jordan-based training transferred to Iraq in February 2017. The Core Team coordinated all NATO assistance provided to Iraq in 2017-2018 and laid the foundation for the establishment of NMI in 2018. 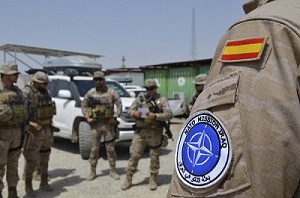 The mission fully integrates civil and military personnel, thereby multiplying the effectiveness of NATO’s efforts and maximising cooperation with other entities on the ground. NMI complements broader international efforts to increase the long-term stability of Iraq and the region, coordinating its support with international partners in Iraq, including the Global Coalition, the European Union and the United Nations. Furthermore, the mission integrates gender perspectives into every stage of the initiating, concept and planning processes. A gender adviser is deployed as part of the senior advisory group, and gender issues are considered throughout the planning, guidance, future review and assessment processes.

In sum, the mission and its objectives can be described as follows:

NATO does not deploy its personnel alongside Iraqi forces during combat operations and it only trains members of the Iraqi security forces under direct and effective control of the government of Iraq. NATO’s advisory activities are conducted in Baghdad, including in the Iraqi Ministry of Defence, the Office of the National Security Advisor, and relevant national security institutions. NATO’s training activities are carried out at the Iraqi military schools in the Baghdad area, Besmayah and Taji. The following military schools are considered as initial training locations: 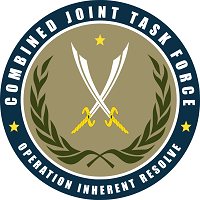 Fueled by sectarian conflicts and division, ISIS ascended from relative obscurity in 2013 to propagate an extremist socio-political ideology, and claimed to have created an Islamic caliphate. Its successful acquisition of conventional weapons, establishment of armed formations, rapid territorial growth and unconscionable atrocities shocked the world and destabilized the region.

By June 2014, the security situation in Iraq had deteriorated with the Iraqi cities of Mosul and Tikrit falling in rapid succession to ISIS aggressors.

From October 2014 to July 2017, CJTF-OIR, Coalition, Syrian and Iraqi partnered forces working together have made enormous progress denying ISIS aspirations. Coalition forces have defeated insurgent counterattacks, reclaimed thousands of square kilometers and significantly weakened the ISIS terror infrastructure in Iraq and Syria. One Mission, Many Nations! 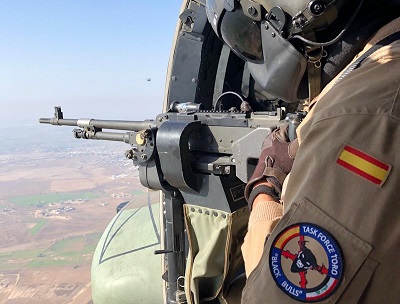 What does that mean?

- “In conjunction with partner forces …” The Coalition strategy acknowledges that the best forces to win the fight against ISIS are local forces. In Iraq, we are partnered with the Iraqi security forces, which includes the Iraqi army, the Iraqi air force, the Counter Terrorism Service, the Federal Police, and the Kurdish Peshmerga. In Syria, the Coalition is partnered with the Syrian Democratic Forces and their partner Syrian Arab Coalition who are focused on fighting ISIS. Ultimately, the military victory over ISIS will be accomplished by the indigenous forces, we will accomplish our mission with those indigenous forces, and improved regional stability will be attained through those partners.

- “… defeats ISIS …” The Coalition mission is to defeat ISIS as a military force on the battlefield in Iraq and Syria. We will disrupt their ability to command and control their fighters, remove their safe havens, interrupt their revenue streams that fund their operations, destroy their equipment, and kill their fighters. We will eliminate their effectiveness as an organized force on the battlefield.

- “…in designated areas of Iraq and Syria …” The Coalition views this fight against ISIS as one fight, though the two countries in which it takes place and the circumstances in those countries are very different. The Coalition operates in designated ISIS-held areas of Iraq and Syria. This does not include southern Iraq or western Syria. The Coalition synchronizes the fight between its local partners and Coalition operations in both Iraq and Syria in ISIS held territory and areas where our partner forces are in direct combat with ISIS, and de-conflicts operations with other regional actors as necessary to achieve desired effects against ISIS.

- “…sets conditions for follow-on operations …” The Coalition is responsible for military operations against ISIS, but military action is not the only action the governments of the Global Coalition are taking now. The Coalition’s military operations against ISIS weaken the terror group and enable the nations of the Global Coalition to bring the full might of their national power – including diplomatic, informational, economic, law enforcement, and other aspects of national power – to bear against the group. The Global Coalition realizes that not only must we defeat the military power of ISIS, but we must defeat the ideology of ISIS as well in order to stem the global flow of foreign fighters and radicalized jihadists in all of our nations. 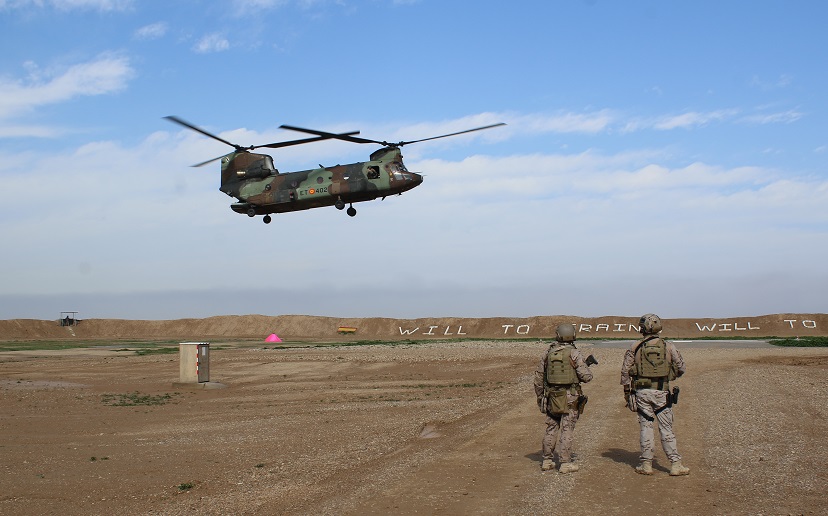 Roughly 150 Spanish troops contribute to the Combined Joint Task Force with the aim of instructing and training Iraqi security forces in its fight against DAESH.

The Task Force Toro (Helicopters Unit) also make up part of the Spanish contingent. They operate from Al asad Air Base and Its main mission is to provide air transport to Coalition tropos. Spain has deployed Chinook and Cougar helicopters.

The Spanish Armed Forces keep providing security and fighting terrorism in Iraq together with our allies within NMI. For this specific mission, Spain contributes with 7 servicemen.

In addition to these personnel, Spain has assigned five servicemen to the US Central Command HQ (US CENTCOM) located in Tampa, Florida, USA. 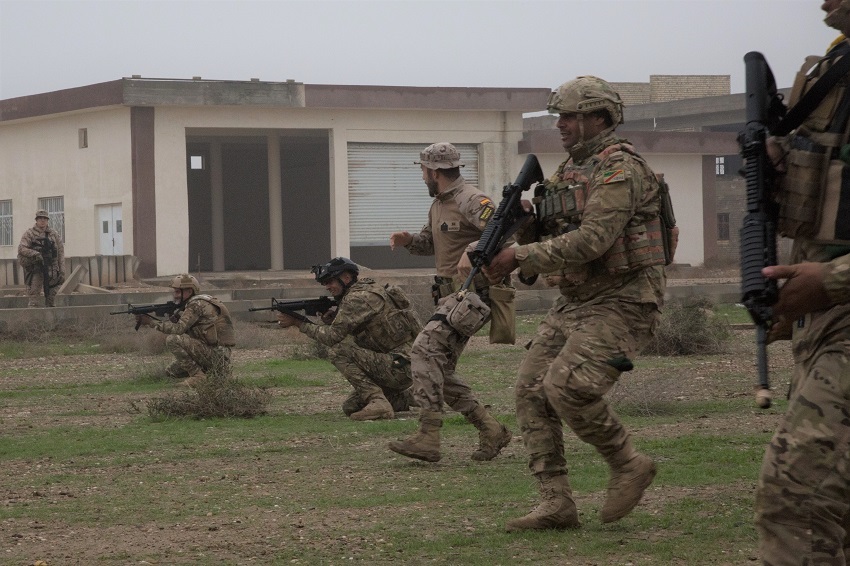 Since the beginning of Spain's participation in the Iraq Support Operation, these are the most significant figures of the training missions conducted by the coalition:

(Including non-exclusive training by Spanish forces as we participate in joint courses).

The ISR (Intelligence, Surveillance and Reconnaissance) unit was deployed at the Area of Operation, in Al Asad Base, on October 2017, reaching Full Operational Capability (FOC) on December the 15th. Since that moment, it began to operate in support to Spanish, Coalition and Iraqi forces.