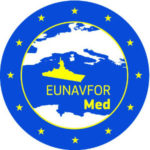 The operation fights to break the business model of smuggling and human trafficking networks in the Mediterranean and help to reduce the loss of lives at sea that occur as a result. As secondary objectives, it supports the implementation of the arms embargo on Libya, imposed by resolution UNSCR 2292 and trains the Libyan Coast Guard and Navy.

It is one more element within the integral response of the European Union to the phenomenon of migration, which seeks to address, not only its most immediate effect, but also the root of the causes, including conflicts, poverty, climate change and persecution.

It is important as well to highlight what this mission is not. It is not a blockade of North Africa, nor an operation against Libya. All activities are carried out in accordance with international law and under the legality of Resolution 2240 of the United Nations Security Council.

In dealing with rescued or retained persons, we always keep in mind the principles of absolute respect for Human and Gender Rights. In addition, the right of no-return is always applied, which means that no rescued person may be disembarked in a third country.

Spain contributes with the following measures:

-          Tactical Aerial Detachment (DAT), which is provided with a maritime patrol plane and was deployed in the Sigonella Air Base (Sicily, Italy). The detachment was called ´Grappa´.

In addition to the means already indicated, Spain supported the Operation by deploying military personnel to the Operational Headquarters in Rome and to the FHQ.

Decision (PESC) 2015/1778 of the Council of 18th May 2015 signified the launch of the EU military operation in the southern central Mediterranean (EUNAVFORMED) that was set in motion on 22nd June that same year.

The Spanish contribution to EUNAVFORMED was approved in an agreement by the Council of Ministers on 10th July 2015.

On 5th October 2015, acting under Chapter VII of the Charter of the United Nations, the Security Council adopted Resolution 2240 (2015). This authorised member states to seize vessels used for smuggling and illegal trafficking of human beings from Libya.

On 20th June 2016, the European Union Council agreed to extend the mandate of the operation for a year and to add, although it would continue to centre on its principal task, two new support tasks:

·         Development of skills and training of the Libyan coast guard and navy.

In this respect, the United Nations Security Council adopted UNSCR 2292 (2016) regarding the Libyan arms embargo.

18th April 2015 saw the largest loss of immigrant and refugee lives in the Mediterranean Sea when a fishing boat with more than 800 people sank off the coast of Libya. This tragedy demanded intervention from the International Community, particularly the European Union.

Consequently, only two days later, in an extraordinary summit regarding migration, the European Union Council for Foreign Affairs agreed to strengthen efforts in the fight against human trafficking and in EU actions in saving lives at sea and offer greater support to the countries on the front lines of this issue, sharing the resettlement of refugees.

To do this, a ten-point plan on irregular immigration was agreed upon. The development of the second point of this plan led to the EUNAVFORMED Operation SOPHIA.

On 23rd April 2015, the European Council underlined that “the Union will mobilise all efforts required to avoid further loss of human lives at sea, to tackle the root of this human emergency in the Mediterranean -in co-operation with the countries of origin and transit- and to fight against smugglers and human traffickers”.

On 18th May, the Council passed the Crisis Management Concept for a military mission under the Common Security and Defence Policy, with the goal of disrupting smuggling and human trafficking networks in the Southern area of the Central Mediterranean. (Decision 2015/778 18th May 2015).

·        January 21. The 14th Spanish contingent took over at Sigonella air base. The contingent is made up of 39 people from different units of the Air Force.

·         March 31. BAM RAYO returns to its Military Base, after the EU decision on withdrawing vessels from this operation.

·         February 15. Air detachment Grappa from the Spanish Air Force reaches 2,500 flight hours after operating during two and a half years.

·         December 28. Extension of the current level of participation of 250 troops with a ship from the Spanish Navy and a surveillance aircraft or a maritime patrol from the Spanish Air Force, along with support to training the Libyan Coast Guard troops.

·         September 1. Spain leads the EUNAVFORMED SOPHIA with the Supply Ship in Combat (BAC in Spanish) “Cantabria”, which replaces “Victoria” frigate in the Operation. Its main mission is to struggle and break up the business model used by human traffickers in the Central Mediterranean.

·         July 25: EU extends the command of the Operation EUNAVFORMED SOPHIA till 31st December 2018, by strengthening even more its role in struggling against human trafficking.

·         October 26: Effective beginning of the on board training of ships assigned to the Mission for such purpose.

·         September 6: The UE Political and Security Committee (PSC) approved the beginning of the activities to promote embargo on arms in Lybia, as agreed by the United Nations Security Council.

·         August 30: The Political and Security Committee (PSC) approved the beginning of the Libyan Coast Guard and Navy training.

·         June 20: The Political and Security Committee (PSC) decided to extend for one more year the command of the mission EUNAVFOR MED by adding two new support tasks: Libyan Coast Guard and Navy training and capacity building, together with contribution to embargo on arms, as decreed by the United Nations Security Council.

·         June 22:  The EU approves the first phase of the mission, which consists on exchanging information and patrolling on the seas in order to identify traffickers.

·         May 18: The European Council sets up an EU naval operation for breaking up the immigrant trafficking network towards the Mediterranean.