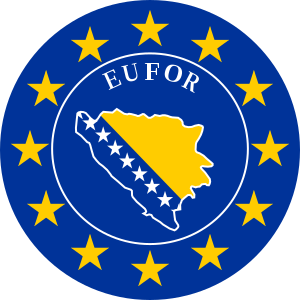 The Spanish soldiers based in Sarajevo contribute to the development of the Bosnian-Herzegovinian Armed Forces by advising them in terms of doctrine, interoperability, standardization and training. This will make them obtain the same capabilities and qualities as the rest of the NATO countries.

Currently, Spain is contributing to the Althea Operation with 3 soldiers, one of them in Mons (Belgium) and the other two in Sarajevo (Bosnia and Herzegovina).

On 25th January 2010, in the Council of the European Union, the member States agreed to transform the operation EUFOR Althea into a non-executive training and counselling Army mission.

The crisis originated in the Balkans in 1991, following splitting of the ex-Yugoslavia, which provoked some armed conflicts in Slovenia and Croatia. After the expansion of the war to Bosnia and Herzegovina, the UN started up an humanitarian aid mission in this country. In November 1992, Spain sent the first contingent, which was incorporated into the United Nations Protection Force (UNPROFOR), with the double aim of preserving compliance of the peace agreements achieved so far, as well as protecting humanitarian aid convoys.

Following the signature in Paris of the Dayton Agreements on 14th December 1995, which brought the war to an end; NATO launched the mission IFOR (Implementation Force), replacing the United Nations Peacekeeping units, and one year later, on 20th December 1996, it was launched SFOR (Stabilisation Force), which is more reduced. On 2nd December 2004, SFOR gave way to EUFOR (European Union Force in BiH), an EU military operation, which was transformed on 25th October 2010 into a training and advising mission for the Bosnian-Herzegovinian Armed Forces.