Offshore patrol vessel 'Atalaya' set sail on September 16 from its Ferrol home base, to take part in a maritime surveillance and security operation in areas of national sovereignty interest. It is integrated into the Maritime Operations Command (MOM) under operational control of the Operations Command (MOPS), within the Armed Forces’ standing operations and in coordination with the Maritime Action Operations and Surveillance Centre (COVAM in Spanish), located in Cartagena.

Among the tasks of this ship is the naval presence and the surveillance and control of maritime areas of sovereignty and national interest, verifying that international regulations are complied with, especially the United Nations Convention on the Law of the Sea. This Navy vessel also carries out protection tasks of submerged archaeological heritage and the fishing community in Spanish waters.

The 'Atalaya', commanded by Lieutenant Commander Ramón Leste León, is the fourth unit of the “Serviola” class. During its thirty years of service, it has taken part, among others, in operations such as 'Africa Partner Ship', 'Noble Centinela', 'Indalo' and multiple maritime traffic control operations. 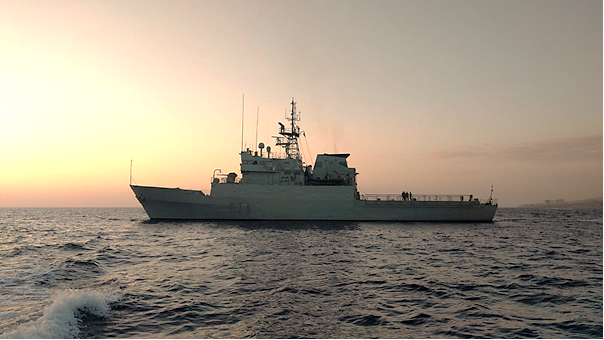