Over 1.500 military personnel take part in the activation ‘Sinergia 01/20’ of the Operational Commands

The four Operational Commands (Land, Maritime, Aerospace and Cyberspace) will operate, once again, jointly in ‘Sinergia 01/20’ within the framework of Standing Operations. Over 1,500 soldiers take part in this activation, which will take place between November 28 and December 3 in the Canary archipelago.

During these days Canarian citizens will perceive the active presence of troops from the Operational Commands in their land, sea and air places, which will include overflights of military aircrafts.

Its purpose is to share the work procedures for conducting Standing Operations and, in this way, identify areas and aspects that may improve efficiency and coordination, as well as set the work route for the coming months. This continues with the purpose of the first seminar, which was held at the Headquarters of the Maritime Operational Command (MOM), in Cartagena, in January of this year.

This activation, like the rest of the exercises and activities of the operational structure of the Armed Forces for the year 2020, was scheduled at the end of 2019, when both the dates and the places where these activities are held were decided in order to coordinate with annual NATO or EU exercises.

Within ‘Sinergia 01/20’, all Command and Forces bodies of the Joint Force Nucleus-1 (NFC-1) will operate in a simulated crisis scenario, under operational control of the Operations Command (MOPS in Spanish). In this way, permanent surveillance of national sovereignty areas is guaranteed, which includes land, sea, aerospace and cyberspace.

‘Sinergia 01/20’ is carried out in compliance with all prevention measures against COVID-19. Likewise, and as in all the operations of the Armed Forces, all the measures are foreseen to guarantee the maximum security, both personal and operational, to minimize the probability of any type of incident. Respect and care for the environment is also ensured.

Standing Operations are an effective tool to keep an eye on sovereign areas, allowing for early detection of threats and facilitating an immediate and viable response to a potential crisis. 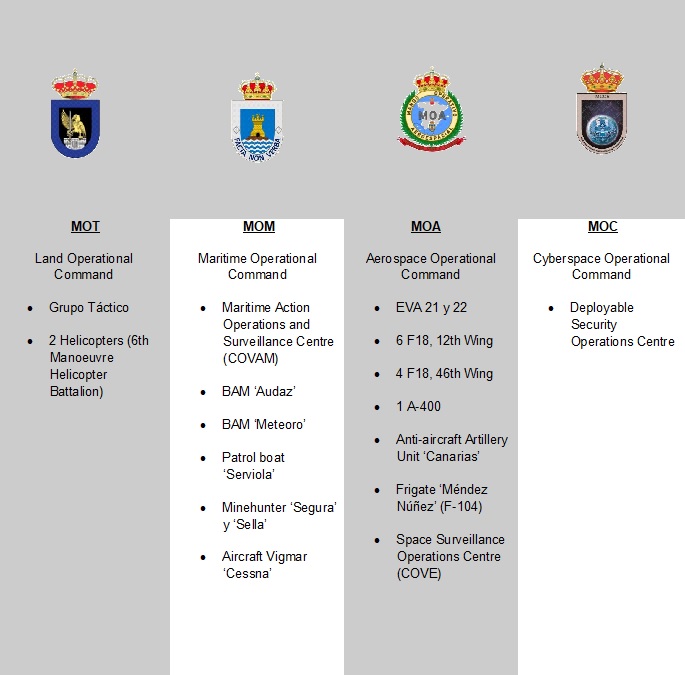