Patrol vessel ‘Centinela’ sets off from Ferrol to carry out a maritime security operation in waters of the south of the peninsula, integrated into the Maritime Operational Command (MOM).

This operation will be carried out in waters of the Mediterranean Sea and the Gulf of Cádiz, with the aim of carrying out surveillance and naval presence in waters of national interest, under operational control of the Operations Command (MOPS).

During the navigation, a collaboration will be carried out with the Special Naval Warfare Force (FGNE) in order to perform a boarding exercise on a merchant ship under the direction of the NATO Maritime Command (MARCOM) within operation ‘Sea Guardian’.

Patrol vessel ‘Centinela’ thus starts its second maritime security operation after being commisioned to the Spanish Navy, once successfully passing its enlistment inspection. It is the step prior to the training inspection in order to be ready in 2021 for the Combat Operational Qualification (CALOP in Spanish) that will be conducted by the Navy Combat Evaluation Center (CEVACO in Spanish).

The Operational Commands, as well as their assigned missions, are another tool of the State to reinforce the commitment of the Armed Forces with the security of Spain, its sovereignty and the defenCe of its interests.

This commitment is reflected in the permanent surveillance of sovereign spaces, which includes our borders, territorial waters, national and outer airspace, and cyberspace, as well as in the permanent control of all air activity that takes place. in the national airspace. The Land (MOT), Maritime (MOM), Aerospace (MOA) and Cyberspace (MOC) Operational Commands make up the Commands structure.

On a daily basis, there are more than 10% of the Armed Forces carrying out permanent tasks in its territorial seas, in its skies, on its borders and in cyberspace.

The ‘Centinela’ (P-72), commanded by Lieutenant Commander Miguel Ángel Pereira Martínez, is the second patrol boat of the ‘Serviola’ class and it is based in Ferrol (La Coruña). As a unit of the Force, it is integrated into the Ferrol Maritime Action Command.

Its main mission at present includes carrying out surveillance and security operations of the maritime environment in areas of national sovereignty. In addition, it collaborates and supports other public bodies in the control of maritime traffic, fishing surveillance and the search and rescue of shipwrecked people. 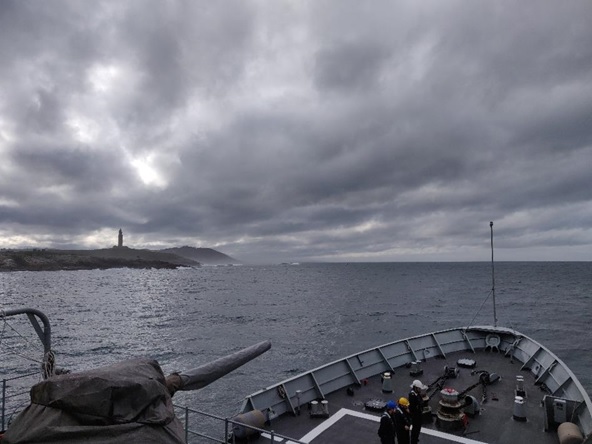