Offshore patrol vessel “Serviola” calls at the port of Melilla

Offshore patrol vessel “Serviola” (P-71), which is carrying out surveillance and maritime security tasks in the Mediterranean and the Strait of Gibraltar Waters, entered to the port of Melilla today, where it will remain docked until October 17.

The patrol boat, integrated into the Maritime Operational Command (MOM in Spanish), set off on October 1 from the Ferrol Arsenal. Its misión is framed within the Armed Forces’ standing operations.

The ship’s deployment has the mission of contributing to the knowledge of the maritime environment in the assigned area of operations, including the control and naval presence of maritime spaces of sovereignty and national interest in the Strait of Gibraltar and in the Alboran Sea.

Due to the COVID-19 pandemic, the ship will not alllow visits while docked.

The Maritime Operational Command (MOM) is the body of the operational structure of the Armed Forces - subordinated to the Chief of Defence (JEMAD in Spanish)- responsible for planning, conducting and monitoring maritime surveillance and security operations of the maritime spaces of sovereignty, responsibility and national interest.

A number of units and forces are operationally dependent on the MOM and can be expanded as the situation requires. These units and forces are not exclusively organic to the Navy, but include others from the Army and the Air Force. The MOM is under the command of the Admiral of Maritime Action (ALMART) of the Spanish Navy.

Standing Operations are the most effective way to maintain knowledge of sovereignty areas over time, which allows early detection of threats, and facilitates an immediate and viable response to a crisis.

The aforementioned structure of commands assigns around 1,200 servicemen to these operations daily, seeking to have a good knowledge of the environment, while guaranteeing an immediate response every day during the year to any incident that may arise, in order to preserve the safety of all Spaniards.

The offshore patrol boat “Serviola” is the first of a series of four patrol boats built by NAVANTIA (former Bazán) in its Ferrol shipyards. The ship was launched in 1990 and delivered to the Spanish Navy on October 2nd 1992. Its length is 70 m. and its beam is 10 m.

This ship is part of the Maritime Action Force with base in Ferrol.

The patrol boat “Serviola” regularly takes part in surveillance operations in areas of national interest and in scheduled exercises with other State units and agencies. She is adequately fitted out to carry out surveillance and protection tasks in our EEZ (up to 200 miles). its range (8,000 nm) allows long periods at sea; more than 30 days.

The commanding officer is Lieutenant Commander Francisco Delgado Urrutia; the crew are 6 officers, 9 NCOs and 27 seamen. A security team made up of 7 Marines from the “Tercio Sur” has embarked for this misión. 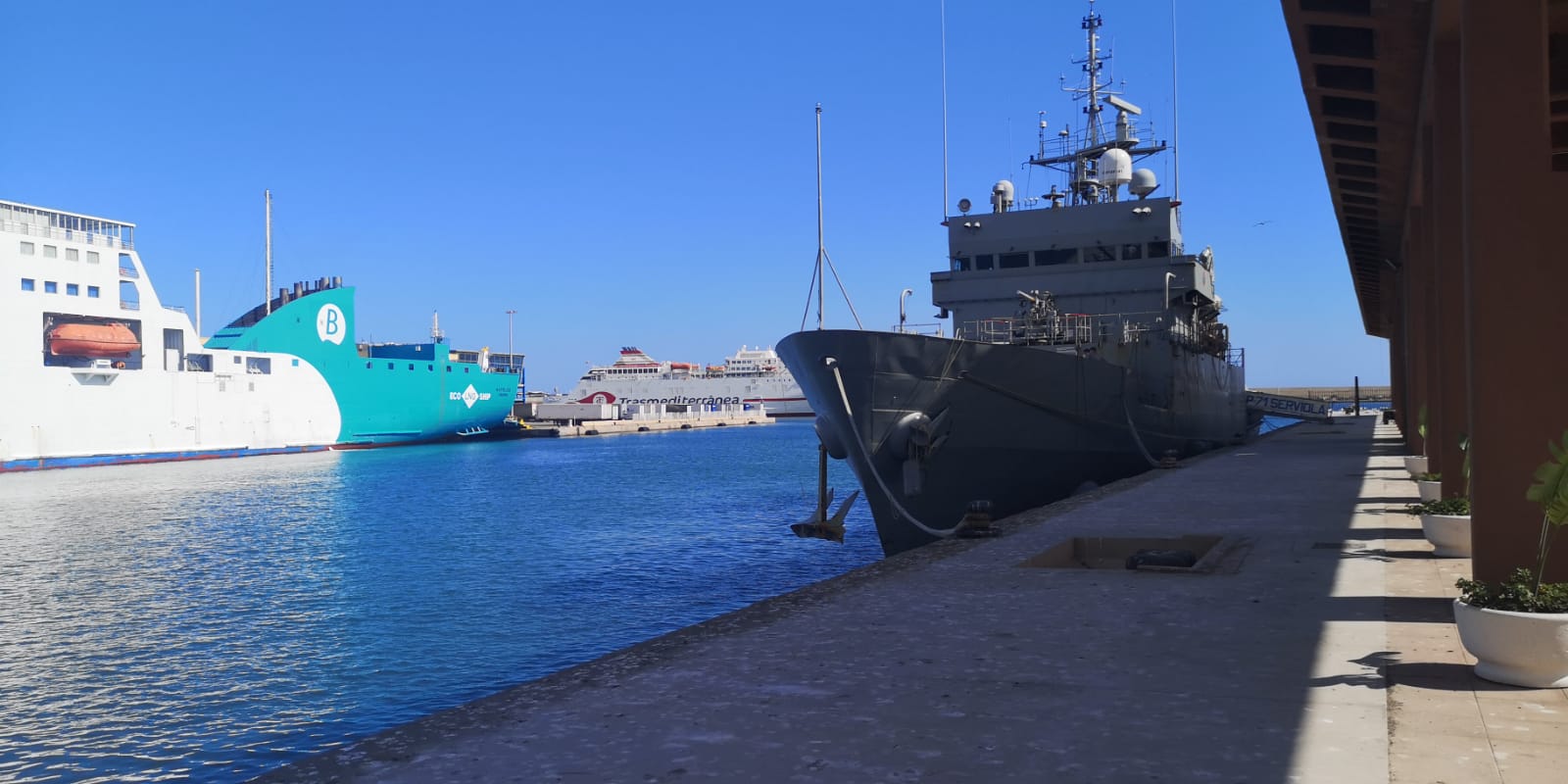 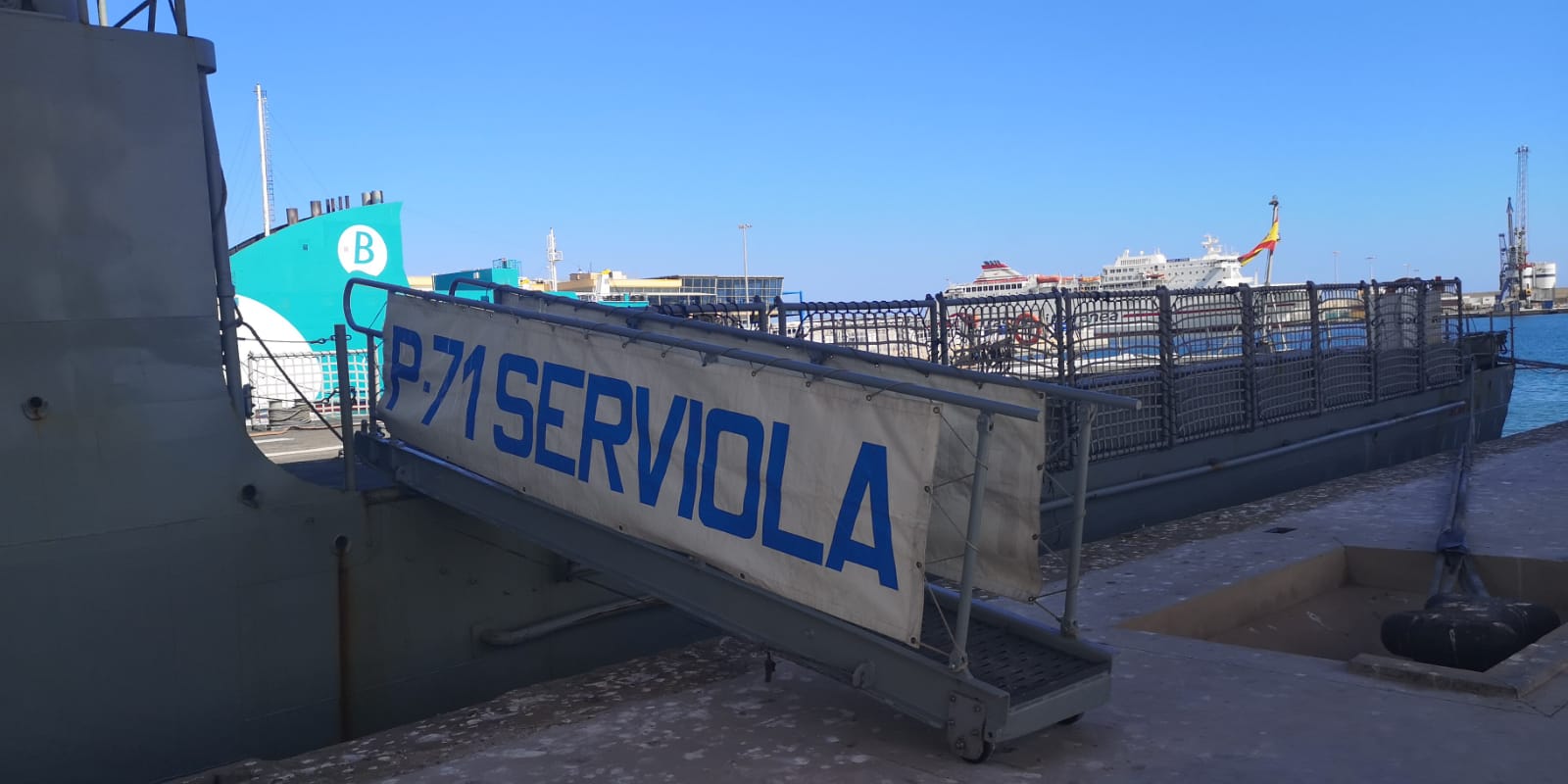