Spanish contribution to the NATO defence plan in Turkey 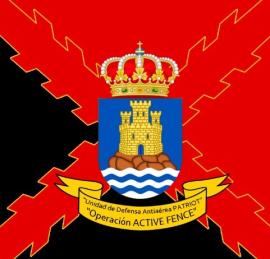 The mission Support to Turkey is defined within Spain´s commitment with its allies to themes of security, neighbourhood and solidarity.

On 29th December 2014, the first contingent began its move to Turkey, relieving its presence one month later to the Dutch unit that was located at the Adana airport.

Since 2015, a PATRIOT battery from the Spanish Army Air Defence Command (MAAA) was deployed in the Turkish city of Adana, conducting 24/7 surveillance. This was a result of the strong Spanish commitment to the collective security of all NATO countries. The Spanish contingent is completely operational and deployed at the Incirlik air base.

The unit deployment was conducted under the Council of Ministers Agreement of 26th December 2014, which extended the participation of units and military observers to operations outside national borders. Thanks to this decision, Spain showed its support and involvement in Turkish security.

The Spanish Patriot unit participation has been extended up to the 31st December 2019.

In August 2014, the Supreme Commander of the Alliance of Europe (SACEUR) requested Spain to relieve some of the deployed units in 2015 in order to maintain the Alliance´s efforts in this mission. Spain decided to adhere to this request and in January 2015, it deployed a Patriot battery belonging to the 74th Anti-air Artillery Regiment, whose mission was antimissile defence of the city of Adana against possible attacks from Syria.

This mission, which began on 26th January 2015, represents the first time that Spain deployed an antiballistic missile defence system abroad.

·         December 19. The Chief of the Defence Staff visits the VIII contingent in Turkey.

·         December 28. Mission extended for a period of six months. It may be protracted depending on the evolution of the situation.

·         July 4. The Chief of the Defence Staff visits the V Spanish contingent in Turkey.

·         November 30. The Spanish Ambassador visits the contingent in Turkey.

·         July. Unit Handover/takeover (HOTO). The IV contingent takes over the command of the mission.

·         January 21. The III Spanish contingent is fully operational at Incirlik air base.

·         December 11. The Ministry Council authorises the extension of the mission till the end of 2016, by authorising a maximum of 150 military contingent personnel.

·         January 26. Handover/takeover (HOTO) ceremony between the Dutch and the Spanish contingents is held at the Incirlik air base.

·         January 15. Personnel of the first contingent of the Spanish Missile Patriot Unit are incorporated into the mission.

·         December 29. Spanish Patriot Unit begins its department and deployment at the Airport of Adana (Turkey).

·         August. The Supreme Allied Commander Europe (SACEUR) requests from Spain its participation into the mission.